The Real Danger in Ignoring the Warning Signs of Dementia

Just 40 to 50 percent of dementia cases have been diagnosed. That means most people suffering from Alzheimer’s and other forms of dementia aren’t receiving the care they need.

Signs of dementia may be overlooked—but more often they’re ignored by seniors and loved ones who aren’t prepared to confront the difficult reality of a life-limiting disease. And the real danger of ignoring the warning signs of dementia can be medical complications, accidents and injuries, and financial crises that jeopardize our loved ones’ future stability.

People suffering from dementia often have coexisting health conditions such as high blood pressure, heart disease, congestive heart failure, cardiac dysrhythmia, or diabetes. And dementia often makes it difficult for them to keep up with medications prescribed to treat these chronic conditions.

Prescription drug errors—taking too much medication, not taking enough medication, forgetting to refill prescriptions—are among the real dangers of ignoring the warning signs of dementia. Poor management of chronic conditions can lead to serious medical complications and hospitalization. Even worse, symptoms of coexisting health conditions such as infection, pain, and metabolic disturbances have been found to make symptoms of dementia, including confusion and agitation, even worse.

Struggling to manage medication is one of the most common warning signs of dementia. Going with your parent to the doctor, taking detailed notes about drug instructions, calling in refills and picking up prescriptions, and making sure he or she is taking medications will help manage coexisting health conditions and prevent larger complications. 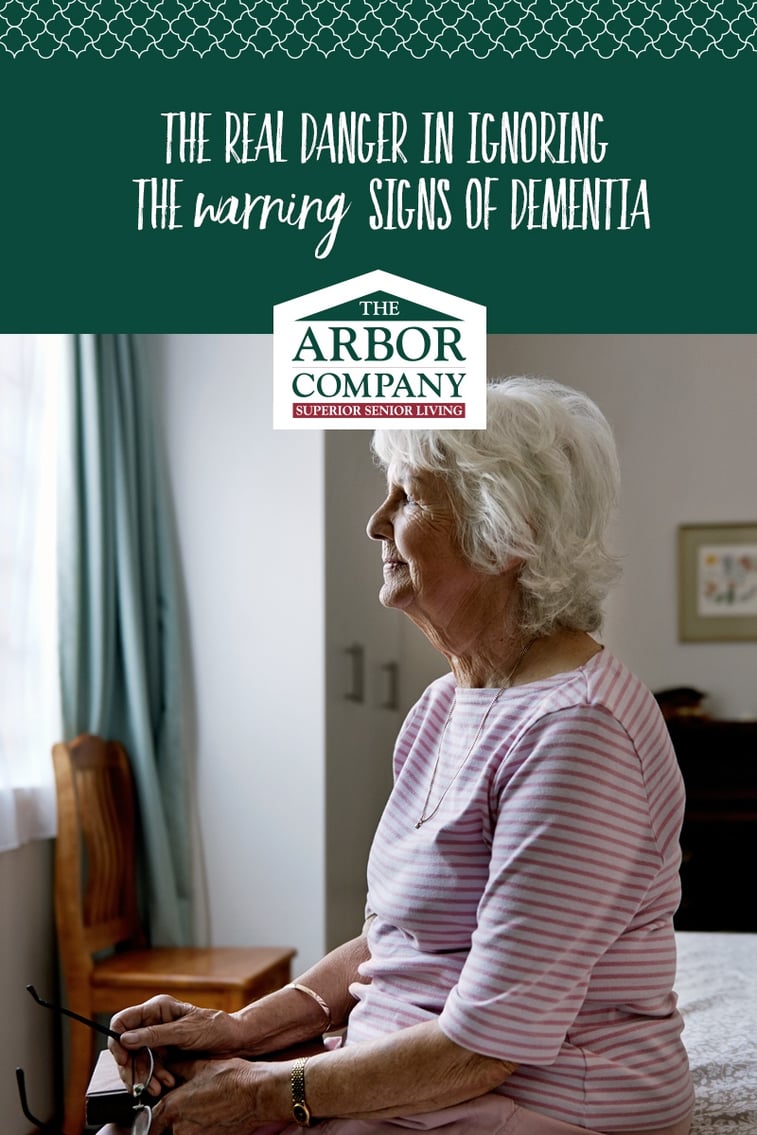 Lots of people ignore the early warning signs of dementia because they don’t want to change their lifestyle or lose their freedom. Refusing to adapt to new limitations might lead to Mom or Dad suddenly becoming “accident prone,” which, if ignored, could bring injury to them or others.

Because people experiencing signs of dementia are reluctant to adapt their lifestyles, accidents become more common. Modifications that make a parent’s home more safe or accessible and arrangements that limit their need to drive could prevent accidents that leave your parents, or someone, else injured.

Struggling with personal finances is one of the first warning signs of dementia. Mom or Dad might uncharacteristically bounce a few checks, forget to pay bills, and struggle to account for his or her spending.

Ignoring these problems can create a tangled financial mess that jeopardizes your parent’s financial stability. Even worse, you’ll find it hard to sort out financial issues unless your parent has listed you as an authorized user on his or her various accounts.

And there’s evidence that seniors with dementia are at heightened risk for financial fraud and exploitation. Sweepstakes scams, home repair fraud, and money transfer fraud are just a few examples of financial schemes that cost seniors an estimated $36 billion each year.

Keeping an eye on your parent’s financial management abilities, getting authorized to access his or her accounts, and organizing and filing all of his or her financial documents will help you avoid financial chaos that can result from ignoring the warning signs of dementia.

The Danger of Ignoring the Warning Signs of Dementia

Taking The Next Step

If you’re concerned about your loved one’s mental state, schedule a visit with a gerontologist or neurologist and discuss options for developing a dementia care plan. A dementia care plan is crucial for supporting the needs of a person with dementia, because it helps document everything one needs from diet, hydration, exercise, medications, mobility aids and other interventions. Be aware of the signs of dementia and always treat them with professional care, because ignoring signs of dementia can lead to serious consequences.