Seniors Celebrate the Sun and the Moon

Across the U.S. people of all ages took a break on Monday, August 21 to view the first total eclipse since 1918. In honor of the rare astronomical event, residents and staff at Arbor Company communities held viewing parties and learned about the eclipse.

Before the outdoor viewing parties, communities stocked up on eclipse glasses (for safe viewing). Other communities held events for viewing a broadcast of the eclipse in their theater rooms. There were a variety of creative snacks and activities planned as well.

Some of the events included:

Arbor Terrace of Burnt Hickory in Marietta, Ga., hosted events all day, beginning with a Solar Eclipse Social early in the day and a “Moon and Sun Mixer” in the late afternoon.

Arbor Terrace of Knoxville, Tenn., had a party and viewing with festive solar eclipse t-shirts for the residents and staff, and an eclipse cake for a post-eclipse party.

Two Arbor Terrace communities had “live viewing events” to watch broadcasts of the eclipse: Arbor Terrace Fairfax, Va., and Arbor Terrace of Herndon, Va.  Fairfax’s Chef Wendell baked cookies for residents to decorate with yellow, blue, and white frosting (representing the sun, earth and moon.) Herndon broadcast the Discovery Channel’s coverage in the Bistro all day with refreshments like Moon Pies and “Eclipsicles.”

Arbor Terrace Peachtree City, Ga., had a Blackout Party.  Staff members will pass out glow sticks and glow necklaces; attendees were urged to wear all black clothing to better show them off! Residents gathered at the pool deck for a viewing. 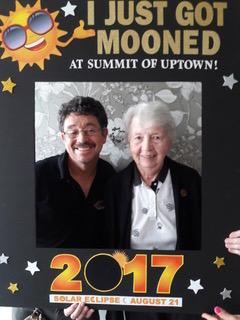 Eden Terrace of Spartanburg, S.C., had an Eclipse Party with a short talk about the science behind the eclipse, along with moon pies, Sun Chips and cool glasses of Tang!

Seniors at Arbor Terrace of Johns Creek in Suwanee, Ga., viewed the eclipse in the community’s theater room while enjoying “moon munchies.”