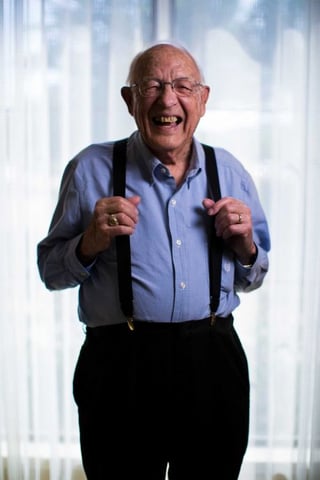 Ruffin “Ruff” Gray and Harry Perry both flew missions in World War II and they are among the many veterans who live in Arbor Company retirement senior living communities. For Veterans Day the Houston Chronicle featured the two retired pilots in a story about their wartime memories.

Both men live at Arbor Terrace Cinco Ranch in Katy, Texas, a community that has independent living and assisted living as well as memory care.

Residents and staff at Arbor Terrace Cinco Ranch and other Arbor Company communities will celebrate veterans today in a variety of ways. And throughout the year, veterans in our communities meet other retired servicemen and women and share stories about their military experiences.

We are thankful for the service of all veterans and proud to make a home for the veterans living in Arbor Company communities.

From the Houston Chronicle story:

On the day the nation fetes its veterans once again, Gray and Perry are members of a quickly-dwindling fraternity. Sixteen million Americans served in the conflict, and more than a million were killed or wounded. Nearly 75 years later, fewer than 850,000 veterans remain. For the two vets, the lessons and memories of their service focus on the men they served with, the friends who braved danger alongside them.